Single News: Hiding Out In Tuscany

The perfect introduction to the new album, The More I Give, slated for September after further mid year single releases. Travel around the planet without leaving home.

Breaking News: CD’s of new album The More I Give has arrived from Implant Media.

If you want your pre-release copy please email me here to place your order. They are not officially available until September, so I have a limited number in stock for the super keen. Pre-release offer $20 + $5 p&h

You can find it on Amazon, Spotify, iTunes and Google Play

“I always wondered where I’d be if I learned to sail across the sea..”

A fabulous video, shot as the album was being recorded, now on YouTube. 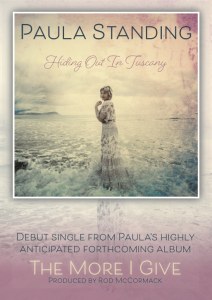 Tuscany has found its way onto a few Spotify playlists and now has 2.4K streams over 41 countries.

Check out the radio interest via Radio News (scroll down)