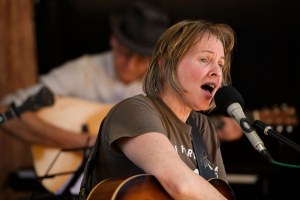 Some pros explain what’s necessary to keep your voice in tip-top shape.

This material has been prepared for informational purposes only, and is not intended to provide, and should not be relied on for health advice. Choosing a vocal doctor is a personal choice. You should consult your own advisors and/or medical professionals before making any decisions.

When you’re a professional singer, just like a professional athlete, you need to keep your body in tip-top shape. Any singer’s most valuable anatomical asset is their vocal cords—tissues and muscles that need care and conditioning—but there are countless variables, including anxiety, humidity, and diet, that affect just how well and how safely you’re able to perform. And just like a professional athlete, you need to be in tune with yourself to a remarkable degree in order to succeed as a world-class singer. There are nuances to the way your specific body and vocal cords work that, with enough training and experience, you’ll be able to recognise as indicators for when to push yourself, when to hold back, and how to create just the right environment to hit that perfect note.

Get your pipes checked

Let’s start at the start. Which, in this case, means potentially undoing something that might have taken root before you even had dreams of slaying an arena. When many artists start singing as children or teens, there may be issues with their vocal cords—nodules, polyps, cysts—or problematic techniques that go unchecked and, over time, cause damage to their instrument.

Dr. Steven Zeitels is the Eugene B. Casey Professor of Laryngeal Surgery at Harvard Medical School, and the Director of Massachusetts General Hospital Center for Laryngeal Surgery and Voice Rehabilitation. He is the go-to for many artists with iconic pipes, such as Adele, Aerosmith’s Steven Tyler, and Sam Smith. Zeitels says that if you’re going to make a serious commitment to singing, you should begin with an examination by someone who specialises in voice issues. And you want to make sure that the office you go to has the capacity to do a laryngeal stroboscopy, which will examine the movement of your vocal folds.

“Once you do that, you’ve got to really pay attention… and not push it over the top,” Zeitels says. “Maybe you’re gigging in a place that has a lot of people smoking and it’s a closed environment and it’s really loud and you have to use an amplification system instead of driving it all just by your voice itself. When it hurts, or when you lose your voice for a day or two afterward, you’re doing something wrong.”

Once you’ve been checked out, it’s time to start conditioning your voice. Just like an athlete wouldn’t dive into a game without at least a little bit of stretching, neither should a singer hit the stage belting with no warm-up.

“I try to push stretching a lot,” says Aaron Low, a speech-language pathologist in Toronto who’s worked with legends like Sting and Mick Jagger. He emphasises that before even starting to sing scales, you need to warm up. “I’d rather break down the voice,” he explains, “and say, ‘Work on your breathing, and work on heating the voice’s muscle system, and then we’ll get to the point where we can do quick movement between different sounds and changing vowels.’ I think a lot of people are unaware of the simple stretching that actually creates longevity and flexibility and endurance for the voice.” Low says he encourages his clients to start their warm-up by working with a simple sound—rolled Rs, lip trills, high-placed humming—and what that is depends on the individual.

How does warming up work?

Zeitels says that when a singer starts warming up, there is a slight swelling of the vocal membranes, which makes them more supple and therefore better-functioning. Vocal cords require more pressure when they get very swollen, but when they get just the right amount of swollen, they do their job perfectly.

“In my view, it’s less that their muscles are getting limbered up—like an athlete might stretch their muscles—and it’s more that the vocal membranes get to an optimal state to create vibration,” Zeitels says.

So once you’re familiar enough with the way your vocal cords work, how do you maintain the perfect balance? Some things to avoid are fairly obvious: Be very careful around sick people; don’t smoke anything or hang out in smoky areas; keep hydrated. Water doesn’t actually touch your vocal cords when you swallow, but your body needs it. Inhaling steam is one way to bring water into contact with your vocal cords, like a balm.

There are some less obvious don’ts, too. If you use aspirin or ibuprofen as pain-relievers, beware—those are blood thinners, which can make you more predisposed to vocal bleeding. Things like artificial stage smoke can greatly affect your vocal health (it happened to Bono!), and reflux can wreak havoc on your esophagus—so it’s best to avoid citrus, vinegar, spicy foods, pepper, caffeine, alcohol, and loads of other fun stuff. Carbonation often results in burping and regurgitation, which you also want to avoid, as singing requires high abdominal pressure.

Your overall health does matter

“People who are performing have to obviously pay attention to their body,” Zeitels says. “They have to make decisions about whether it’s appropriate to sing, for instance, when they have a respiratory tract infection. When do you go out? When do you not go out? That’s actually something that has to be learned from experience, because often the injuries have little to do with the skill sets of the person. It’s their work ethic. They’re so intrepid they’re going to go on stage whether they’re sick or not, and that’s when they sustain injuries that ultimately take surgery to repair, like bleeding into vocal cords.”

As scary as that might sound, Low points out that most vocal issues are fixable, saying he’s been able to reset years of tension in as little as a few hours of hands-on physical therapy in some cases. But as Zeitels notes, the optimal path is avoiding doing things the wrong way from the start. And then keep it up.

“If you take care of yourself,” Zeitels says, citing The Who singer Roger Daltrey’s remarkable performing streak, “you can keep going for 50 years.”