Paula Standing produces acoustic folk songs with an old country twist and a sting in the tale. Both local and universal in songwriting and performance, what you hear, will not be what you expect. 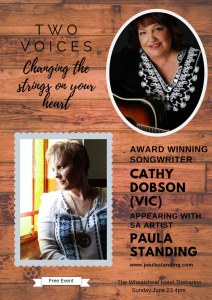 Two Voices ‘changing the strings on your heart’

This was the final show for my Truth & Trickery Tour and the one show only with Cathy Dobson from Victoria. We were rewarded with a wonderful attentive crowd at The Wheaty. What a wonderful Sunday afternoon and I was so pleased Cathy got to show off her stuff in front of such a fabulous audience. The best way to finish off my first ever tour! You can hear more of her music in online stores and streaming services.

I have had a fabulous time on this journey telling tales to audiences in Melbourne, Brisbane, Barmera and Adelaide. Many thanks to those of you who have attended gigs, musicians who have supported me and all of those who have bought my music, also the radio stations and presenters who are playing my music. You make it all worth while.

END_OF_DOCUMENT_TOKEN_TO_BE_REPLACED

Another great festival at Tamworth over and done 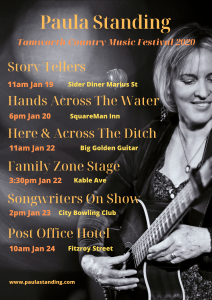 Sunday morning, January 19 Kicked off my festival journey with a walk-up to the Coca Cola Stage in the Town Hall, closely followed by a set at Story Tellers at The Sider Diner. In the afternoon I was, once again, part of the awesome ‘Dolly For Dolly’ benefit concert at The Moonshiner’s Bar.

END_OF_DOCUMENT_TOKEN_TO_BE_REPLACED

As the name suggests, Womstock is a Wombat Festival with Live Entertainment, cruelty free food, fun, games and laughter on the  banks of the beautiful lake at the Flaxley Wombat Sanctuary. I was proud to support these wonderful ladies and their furry friends.

The great news is, they managed to raise in excess of $10,000! So huge thanks to all of you who bought tickets, merchandise food, raffle tickets, donated and volunteered.

” This was the sanctuary’s very first open day and a very important fundraiser to help raise funds for a fire bunker for the special needs wombats this fire season.”

END_OF_DOCUMENT_TOKEN_TO_BE_REPLACED

In September, I travelled to my favourite Flinders Ranges town of Melrose, but not for the sadly missed Music Muster. When the Muster was still a thing, I discovered the perfect place for a live shoot and promised I would return. The Holy Trinity Anglican Church offers perfect acoustics and a glorious light.  I knew this was the best location for a gentle murder ballad and it did not disappoint.  We took advantage of this exquisite building to portray a sad tale, but one clothed in a rich ambience.

Thanks goes to Fr John Fowler for arranging access and facilitating the extended time required.

END_OF_DOCUMENT_TOKEN_TO_BE_REPLACED

I was pleased to finally release my EP ‘Taking It Well‘, because these songs have been burning a hole on my shelf since 2017..  These songs deal with stories of people dealing with crazy situations but still, ‘taking it well’. ‘Fly’ is dedicated to two Australians executed in Bali and how they turned their lives around in prison.

The tracks have been downloaded by a number of radio stations and played on various shows across the country. I was also able to feature it as guest artist on Radio Adelaide‘s Songcatcher program.

END_OF_DOCUMENT_TOKEN_TO_BE_REPLACED

Well this year 2018, I made my debut appearance at the Semaphore Music Festival. Monday October 1, saw me on the BSide Community Stage in Mundy St, Port Adelaide. I kicked off the Monday lineup and was followed by Dave Robinson; Amy Jennifer; Moose Hair; James Hickey and Kylie Brice. An equally awesome lineup was inside Hart’s Flour Mill. Lovely close to a fantastic festival.

Tracey Arbon of Music Talks has chosen me as the feature folk artist for the May issue. The article covers my musical journey and those pivotal moments that pushed me into a singer songwriter world. Sometimes singing in the shower pays off.

You can discover many new artists on this platform, so click on the link and enjoy! 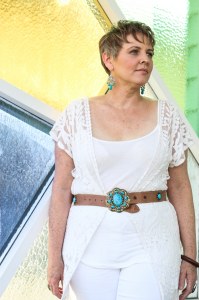 A rather drawn out affair, recording began in September 2016.  With help from Emily A Smith, Ali Foster, Shireen Khemlani, Mick Albeck we laid down the beginnings of six new tracks. Under the steady mixing hand of Anthony Stewart at Red Brick Music and Neville Clark, Master of mastering, at Disk Edits I released a single ‘I Tried To Write A Christmas Song’ in time for Christmas.

Back in the studio in December, I made a start on a further four tracks and was overjoyed when the Sherrahs agreed to add their amazing harmonies. During 2017, the rest of tracks came together and I was able to launch Good Heart in November.

END_OF_DOCUMENT_TOKEN_TO_BE_REPLACED

“Keeping you in the loop with Radio Shows I am involved with.”

Note: I will be a regular guest on Folk ‘Til Midnight with Eric Ford for the remainder of the year. The second Wednesday of the month will be an expose of my performances, new songs and an update on SCALA performances.

Thank you Community Radio through out Australia. Recently, My Heart Goes With You charted in the top ten songs downloaded by regional stations, for two weeks running!!

Still talking to some radio stations this month about Tuscany and future releases.

Interviews are being lined up for the next couple of months by Eva at Hot Off The Press.  I will be setting them up on here and social media posts, so keep an eye out for when you may catch me.

END_OF_DOCUMENT_TOKEN_TO_BE_REPLACED

Another casualty of COVID 19, Adelaide Songs have had to cancel the May event and will reschedule for later in the year – October  or November.  As a result of the move, I have had to resign from the project as I have an album to release and tour at the same time. Please keep an eye out for the new event.

Official CD Launch at The Wheaty

Although we had a mini launch of our CD during the Songs Of The Mid North Tour, it was apparent there needed to be a bigger better affair. So, there was an official launch at the Wheatsheaf Hotel November 10th.

A small preview of the CD was presented on Songcatcher  Radio Adelaide 101.5fm October 25th

We were asked to perform our show at The official opening of the new Gawler Institute October 25th. Well attended and appreciated gig. Thanks to all the patrons for a great show.