Thrills galore this month at The Gov’s Variety Show. Returning after an extended Covid hiatus, we are set for the big room at The Gov. Ross Voss has invited me to open the show! 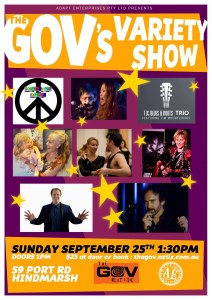 A wonderful evening was had at the July Club Acoustica event at The Olive Branch Cafe in Balhannah. 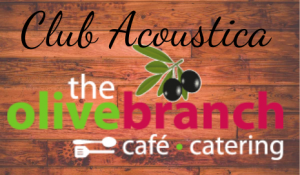 Many thanks to Club Acoustica for inviting me to be part of the show this month, along with Michael Pearse (Courtney and Jess) and Mick Micaleff. Plus beautiful poetry from Belinda Broughton all hosted by the capable Terry Evans.

Club Acoustica is on the first Sunday of the month. ENTRY IS FREE BUT BOOKINGS ARE ESSENTIAL.  Please contact the Olive Branch Café on 8398 0009 to secure your place.  (And, if later on you find you’re unable to come, please call again to cancel your booking so people on the waiting list can be offered a place.)

We are grateful to the Olive Branch team for their ongoing support of Club Acoustica and the arts in general. Let’s show our support for the café that gives our club a home by enjoying their delicious food and drinks while we’re there!

Great news! I am pumped to be part of The Fleurieu Folk Festival 2022 three day event in Willunga this October 21st-23rd.

After a complete cancellation in 2020 and a hybrid version in 2021, we return to a much more normal looking event for 2022. It is with great pleasure to announce that I have been accepted to play again. I am teaming up again with the amazing Stephen Loss and Dave Taylor for a jumping set in The Footy Club, Saturday 22nd at 5:15pm. 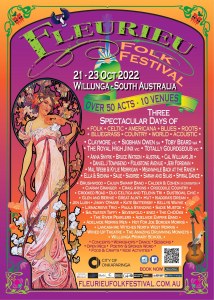 How exciting! I joined the Minnesota Association of Songwriters online on Good Friday Morning (ACST) as guest speaker. I was approached by their convenor, Chad Shank, late last year and it all went off without a hitch. It was a fab online event with the group joining in with questions and comments.  I hope I was able to shine some light on the mysterious art of songwriting for the group’s up and coming writers. 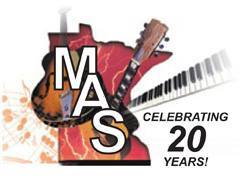 My music spent a lot of time in the radio charts in the USA last year so, it is good to give back to the music community. I plan to travel there and meet some of these people face to face one day soon. The Minnesota Association of Songwriters is a volunteer, non-profit organisation dedicated to celebrating the art and craft of creating original music. It is a joy to support such a worthy group.

At the invitation of Sunee Holland, I joined her and Jack Robins at the front bar at  The Cranker on Easter Sunday night. A good appreciative crowd turned out to enjoy some delightful original music at this iconic venue!

It was good to be back out in the thick of things once more. Particularly lovely to catch up with some peeps for the first time this year and hear the lovely tunes of Sunee and Jack. 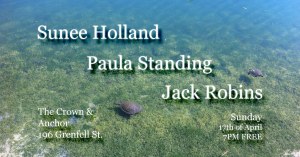 Bill Wence Promotions worked hard behind the scenes for 18 weeks starting September 2021.  Two hundred CDs were pressed in Nashville and sent out to radio stations across the USA. I am pleased to see 2022 kick off to a great start, the last report showed a total of 139 stations played my music.

More precisely, 84 Americana stations played various tracks from the album, The More I Give and 55 Country stations spun the track, Call It Home.  This amount of airplay impacts the Roots Music Charts and the album appeared on various charts.  Several tracks also popped up on the song charts! 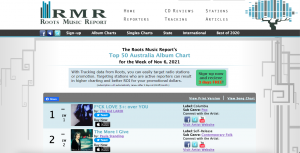 The snapshot above shows all the charts where The More I Give appears as of Jan 15, 2022.

Particularly pleasing is the Top 50 Contemporary Folk Chart where the album moved up and down a few times, but ended up at No.11 at the end of 2021. Still doing very well at No.14 in 2022, I am overwhelmed to see that one of my favourite artists, John Prine also on the same chart! The album sat amongst some pretty amazing names. Over several weeks, artists Lucas Nelson, Brandi Carlisle, Hayes Carll, Robert Plant & Alison Krauss and Charlie Parr shared a chart with me.

Nor can I be displeased with No.24 on The Top 50 Folk Album Chart. The album was at No.21 for a while and again, it is a pleasure to be on the list with such great names.

Nice start to the year.  Top 50 Contemporary Folk Song Chart from Roots Music Report shows Call It Home, The More I Give and I’d Go Back Again at positions 17, 18 & 19. Early in the year they remained at 3,4 & 5 on the Top 50 Australia Chart

The promo has now ended, but I hope to stay in the hearts of those listeners that heard some of my tunes.

Sadly, due to family commitments I am unable to reschedule to fit the new dates.

At this stage, I still plan to release my new single in March.

Written with Jeremy Edwards at the DAG Songwriters Retreat back in 2018 and recorded with Rod McCormack in 2019. Described as a gentle murder ballad, if there is such a thing, this one will finally seeing the light of day. 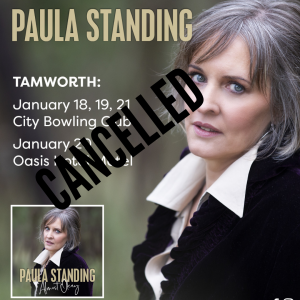 The Semaphore Music Festival kicked off this year at the beginning of October, with events spread across every weekend until early November! I was pleased to open the Foreshore event at Semaphore SA, on October 31, Halloween Beach Blanket Picnic. Stephen Loss and Dave Taylor added to the atmosphere with Bass, lead guitar and keys.

After a delayed start, the afternoon was enjoyed by all in near perfect weather! Five bands on the back of a truck! 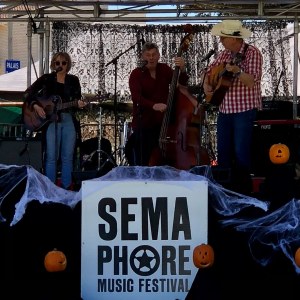 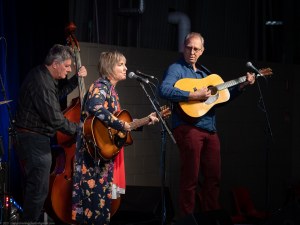 Some great pics have come in from Sam Pickering from the recent Fleurieu folk Day held at the Willunga Spots Stadium October 16th. Stephen Loss on lead guitar and Dave Taylor on upright bass kept me company (and in time) for the duration. We played to a fabulous and appreciative crowd and a fun time was head by all.
Included on the day, performances from the Judith Crossley Memorial Songwriting Award winner, Peter Thornton Memorial Award presentation, and winner of Folk Alliance Australia Youth Folk Artist of the Year. Great acts filled the day from 10am – 10pm and the bar staff kept us lubricated. Food trucks fed us and a merchandise room satisfied the shopping addicts!
There will be two more of the Fleurieu Folk Days on the music calendar. Keep your eye on the Fleurieu Folk Festival website or better still, sign up to the newsletter.
Paula Standing2021-10-23T05:50:41+00:00September 26th, 2021|0 Comments
Read More

Read All About It

With special thanks to James Moore at Independent Music Promotions, I can share some wonderful articles written by multiple publications from across the US and UK. The More I Give is getting some fine attention!

“As we get to the deeper cuts, Standing carries on with a sultry flow and rounds off the album like a nice hug. The strings in Just Like Its Mine make you feel like you’re in the old-time plains of America, sitting on a porch in a rocking chair as guitar caresses the soul and sweeps you onwards.”

“The album’s self-titled track is especially impactful. Solemn piano is patiently accompanied by emotive vocals and gradual acoustics. The strings and piano intensify as a vocal duet emerges: “And I can’t help wonder how it all began / And I can’t help wonder when it’s gonna end.” The track showcases Standing’s gripping songwriting in passionate form.”

Breaking and Entering Milwaukee (US)

“a richness to detail in the instrumentation that far exceeds that of most albums. The array of stringed instruments whirl and tread waves of water of notes and rhythms, spending a fair amount of time on each track humming along sans drums. Standing gets down, as it were, on the vocals with a strenuous voice timed with canny inflections to spotlight some credible songwriting that’s another hallmark of this collection.”

“Understated music like this is what makes the world go round.  Memorable, effortlessly connecting to the listener.  Each song is a story with a purpose, holding a myriad of meaning for all.

Paula Standing is a bit of a dark horse.  These songs might seem straight forward enough at first listen. However, she has a secret weapon. Talent.”

“Cut from the same tapestry as the likes of Dar Williams or Shawn Colvin, Standing’s folk is blended with subtle pop sensibilities and a whole lot of knowing—about life, and how she’s living it.”

While the music of Paula Standing can have a folk sound overall- those acoustic guitar vibes which sometimes border on country- there are a few other sounds to be found within here as well.